I think I’ll just forget to put a new price target on this name for a while. All of my prior sales were mistakes.

The Stock is Moderna (MRNA) . The stock is running this morning, after running on Friday, after running on Wednesday. My target price for those that will recall had been $114. That was actually my second price target, my first being $96. A reader called me out on that on Friday, and yes, I did take a little something off toward the end of the half session. I am still hanging onto 67% of a full position. What to do now? With no real target price? Maybe just ride this one into the sunset? Let’s think about this. I mean my net basis stands with a $29 handle.

Moderna has made clear the intention to apply today (Monday) with the Food & Drug Administration (FDA) for an EMU (Emergency Use Authorization) of it’s mRNA-1273 vaccine candidate, adding that primary analysis of this candidate currently in Phase 3 clinical studies shows an efficacy rate of 94.1% against contracting the virus at all, and 100% efficacy against infection with severe disease. Plans are to continuously follow along on reviewing data on safety, but to this point, no new serious safety concerns have been identified.

According to the firm, the FDA has set a date of December 17th to consider the application, one week after the December 10th date to consider the Pfizer (PFE) /BioNTech (BNTX) candidate. Moderna, which has already said that the firm expects to have 20 million doses available before year’s end, expects to be able to supply between 500 million and 1 billion doses globally next year (2021).

Moderna expects to file for a conditional marketing authorization with the European Medicines Agency today as well, while having also announced a deal with the UK that increases sales to that nation from 5 million doses to 7 million doses.

Remember that both the Moderna and Pfizer vaccine candidates have been derived through the use of experimental Messenger RNA technology, and will require for each individual… two doses nearly a month apart.

Readers will recall that Moderna was among the very early firms to work on finding a vaccine for the SARS-CoV-2 coronavirus, along with Pfizer and others. As for Moderna, the government through “Operation Warp Speed”, had sunk $955 million into development and procured through contract the first 100 million doses with an option to purchase 400 million more, bringing the program’s investment to $2.48 billion. The Pfizer vaccine, a collaboration with BioNTech, though not accepting money earmarked for development, does also have a contract through “Operation Warp Speed” for $1.95 billion as well. That deal grants the U.S. the first 100 million doses of that vaccine plus an option to purchase 500 million additional doses.

Moderna, like Pfizer, has indicated that vaccinations could begin within 24 hours of FDA approval. I think it quite notable that Moderna CEO Stephane Bancel in his public comments went out of his way to thank the Moderna team, trial participants, and several government agencies or programs including NIH, NIAID, BARDA, and “Operation Warp Speed”, which through investment and logistics may end up not only scalping years off of this pandemic, but also end up being the greatest collaboration between the U.S. military and private industry since at least World War II. 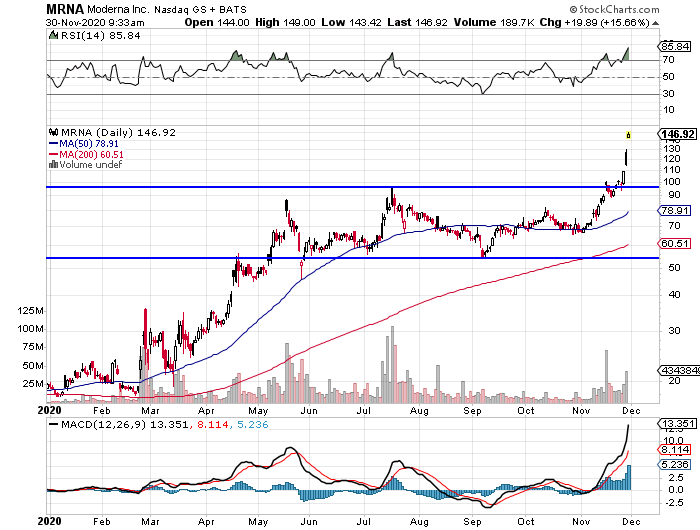 The fact is that if I was going to play the rest of my position by my normal set of rules, that the shares have already opened above where my next price target ($136) would have been. Do the gaps created recently have to fill? That would not surprise me in the least. That said, this is house money at this point. I’m up 400%. I think I’ll just forget to put a new price target on this name for a while. All of my prior sales were mistakes.